Well, I’m sure you all saw by now, but I did it.  I shaved my head today.  I woke up with a very irritated scalp and I started losing quite a bit of my hair. It wasn’t clumping yet, but I didn’t want it to get there.  The stylist said I should take the first cut.  I had no problem doing that. 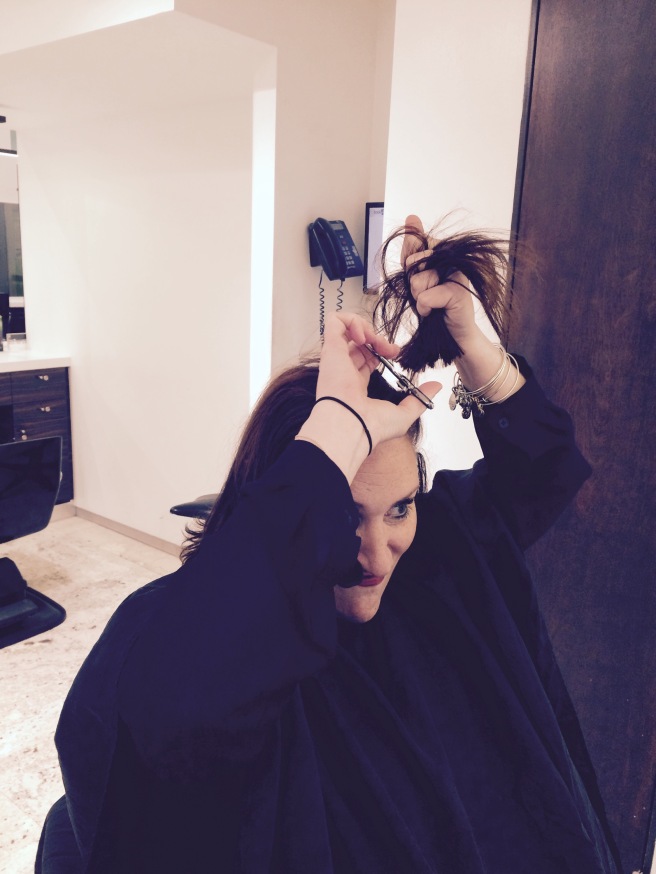 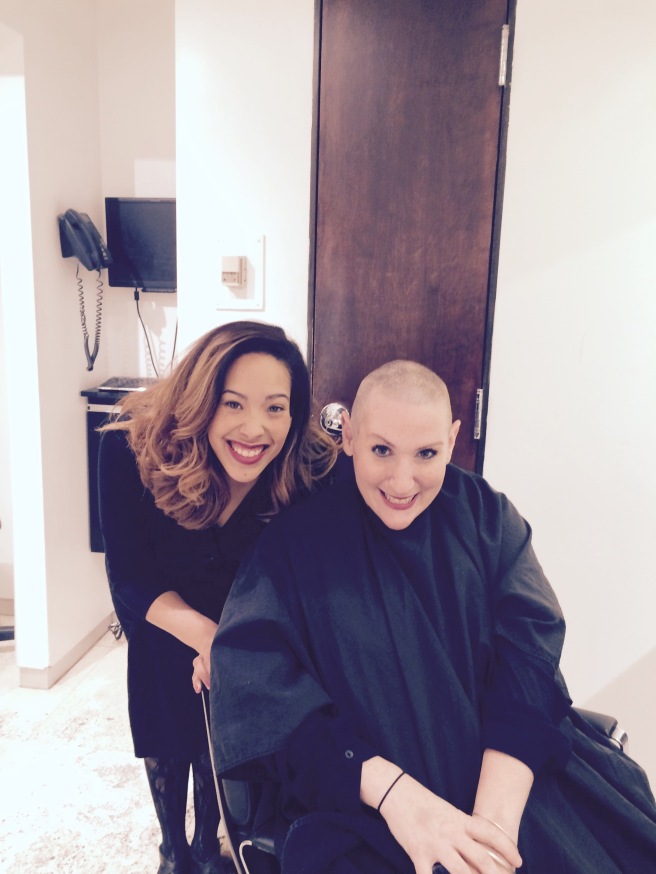 It feels so much better.  It is still irritated, but now I’m not constantly seeing strands of hair everywhere.  I was very happy to get this step it over with.

Other then that, I woke up at about 3 this AM and fell back asleep about 20 minutes before I had to take my shots at 7.  When I woke up again to take it, I stayed up.  About 30 minutes after I woke up, I realized I felt pretty good.  I wasn’t nauseous, I had left leg issues, but the right leg seemed normal.  My ears were not 100% better, but they were manageable.  It was so nice.  My parents went to church and I had every intention of staying in the room and avoiding the Chicago Sunday crowds.  That’s when Tom and I decided it was time to shave my head.  First, we went to lunch and I am embarrased to say… We went to Eataly for the 5th time in 3 weeks. Tom had never been, so we had to go.  My father took one for the team (he is not a fan).  I’m pretty sure Tom peed himself.  He was in food heaven.  I guess that is appropriate… As it kind of is food heaven.  I was good and wore a mask while I was there and was rewarded by getting freak looks from more people then you would expect.  Afterwards, we shaved the head, went to Bloomingdales and headed back to the hotel for the night.

Tomorrow, I have to head to the hospital to have my labs drawn.  I should be officially Neutropenic (A shortage of the good white blood cells in the blood, which increases the risk of infection) tomorrow and it will be hotel room and if I go out, mask and gloves.   This will probably last until I get my stem cells harvested on Thursday.  It is also the day that side effects from the shots usually show their face, so I’m praying that I get lucky and don’t have any.  Hey,  some people don’t!   Tomorrow is also my dad’s birthday.  I made my brother promise to take them out to dinner.  Naturally, they are putting up a fight about leaving me for the night.

On the home front,  Rosemary was not at all impressed with my new cut.  I have been prepping her for a while, but when I facetimed her and took my scarf off, she just looked at me and said…. “Well, you kinda look like a boy with make up”. BEST RESPONSE EVER!   Lol. She lost interest quickly because she was playing with our amazing friends (and neighbor and personal pharmacists) kid’s and well… they are well cooler then I am!

Well,  I am happily signing off for the night delighted at the nausea free day I had.  I will happily trade hair for that… And you know… Stopping my MS in it’s tracks!

PS… Someone better fix this laundry room fast.  My mother is having such withdrawl that tonight she washed the kitchen floor with furniture polish she bought at the corner store. I discovered this when I nearly fell. Not cool Marianne… Low platelets…. Not cool. I mean even if I didn’t almost kill myself, polishing the floor in the kitchen of our hotel room is honestly a bit much.  I draw the line at the swiffer.

PSS – Eataly has amazing wifi and I downloaded a movie and 2 TV episodes while we ate.  When we got back, we were told they were working on the Internet and it has been so much better.  I mean, it’s no Eataly, but it only logged me off twice in the past hour.  I’ll take it!